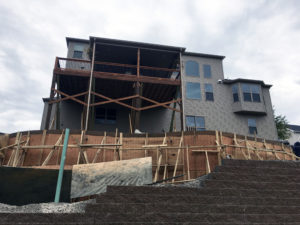 A look up from the base of the property with pool construction now underway.

The task was definitely a steep one. Find a way to build a pool into the side of a backyard hill that was on about a 35-degree incline. That’s what the new homeowners in St. Charles County had in mind when they initially made their purchase. They loved the house but knew that the backyard was essentially a waste of space unless they took dramatic measures.

One came in with an elaborate, but not very practical plan that didn’t leave much accessibility to the pool. Another came in with plans that though practical, didn’t have much design flair. But the Liquid Assets Pools plan – that one was just right.

According to John Jacobsen, president of Liquid Asset Pools, “We had to build this one like they build pools out in Colorado or along the coast of California. That means instead of building the pool into the side of the ground, it all has to be free-standing so that gravity won’t take its toll on the pool, pushing it down the hill.”

Construction initially was to begin last year, but the Homeowners Association needed convincing that the addition of the pool wouldn’t have any effect on a retaining wall that sits at the bottom of the property. The homeowner called on Liquid Assets to help clarify that all was good – so construction finally got underway in late September.

A lot of earth was moved and a new retaining wall was created. Plans call for a two-tier deck with stairs leading out from the basement to the top level and then an additional set of steps will lead to the pool level. 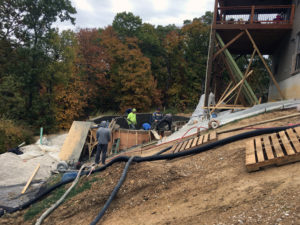 Workers performing the gunite pour had to work a pretty steep angle!

When it’s all said and done, the homeowner will have a pool that will turn their backyard from an unusable area to a focal point that’s sure to be enjoyed by the entire family. The homeowner mentioned they’re all already looking forward to next summer and can’t wait to enjoy the new view from above and their new pool that’s below. 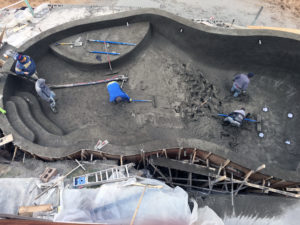 A view from the homeowner’s deck, looking down on the pouring of their new gunite construction pool.

Now in our 13th year, Liquid Assets Pools specializes in designing and constructing gunite concrete pools for its customers in central and eastern Missouri, Lake of the Ozarks and southern Illinois.