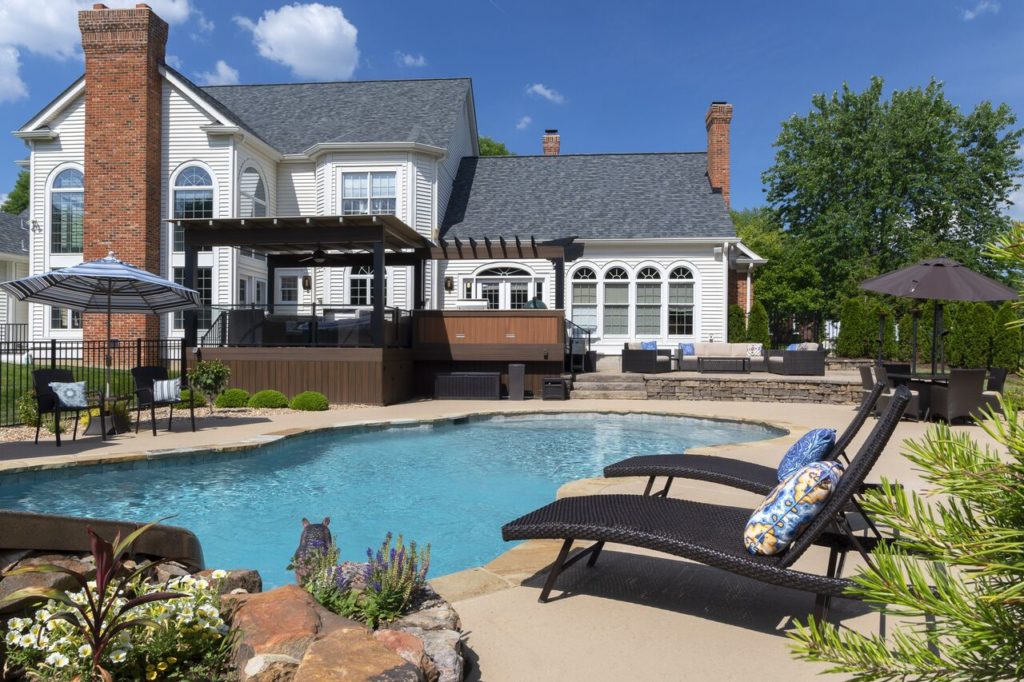 It’s hard to imagine that a rectangular fiberglass pool once occupied this space.

The family had moved into their home about 10 years ago and at the time, it had a fiberglass pool in the backyard.

“It was great that we had a pool,” said the owner. “But it was so small – two rafts in it and it was pretty much full,” he added.

So about 3-1/2-years ago, the couple began looking and decided to create something new. They’d both seen several Liquid Assets Pools signs out in the yards of neighbors who were getting their own new pools. 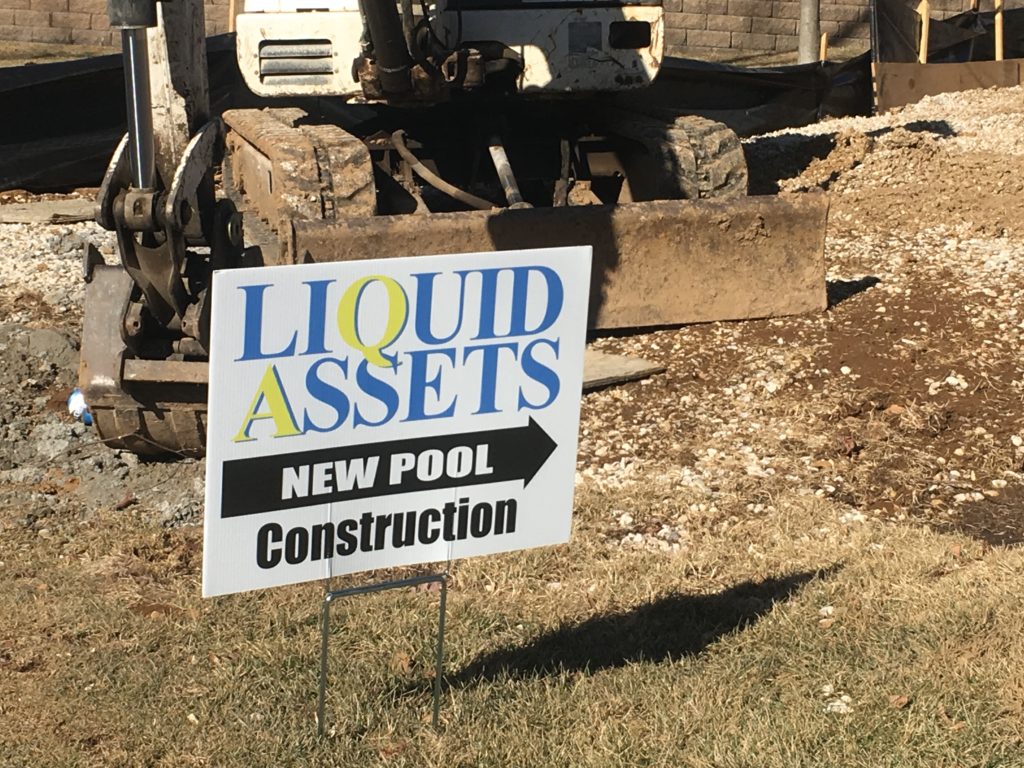 If you see this sign, great work is underway.

“We saw the signs and I thought, ‘Liquid Assets – now that’s a cool name for a pool company’. So we checked out their website, looked them up on via the Better Business Bureau and on Angie’s List and then contacted them to arrange a visit,” said the owner.

What followed was the beginning of an on-going relationship.

“John Jacobsen was great from the get-go,” said the owner. “We talked about ways to remove the fiberglass pool and deal with a 4-foot retaining wall. Our backyard also had a bit of a swamp issue that other builders seemed reluctant to figure out options. John and his team explored a number of possibilities.” 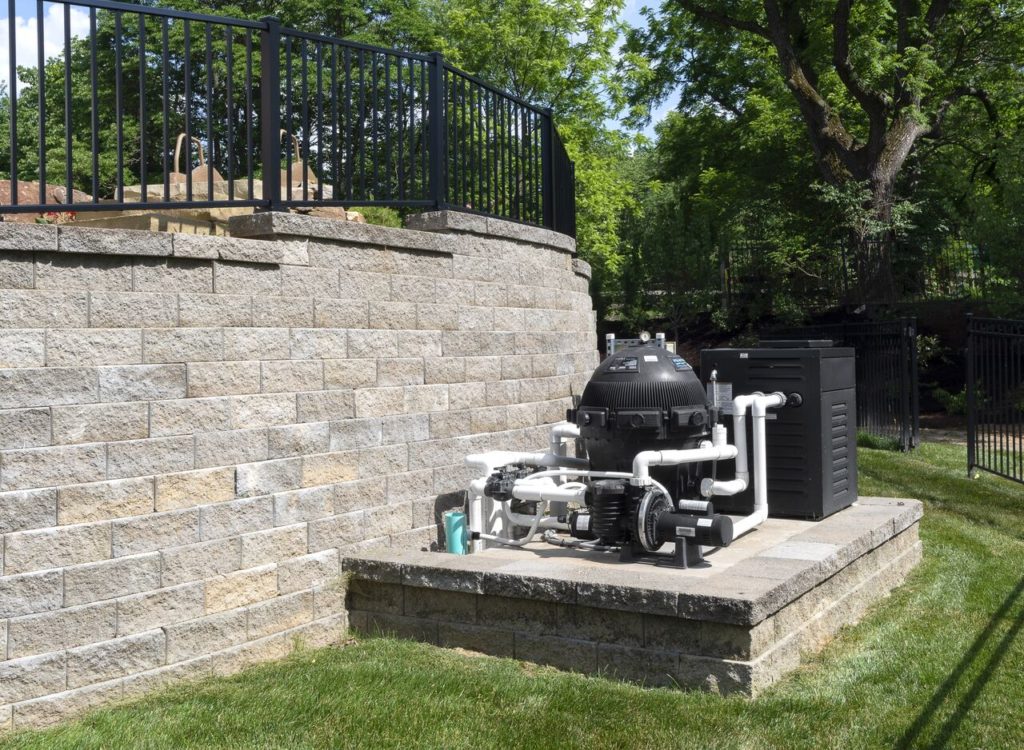 The 10-foot retaining wall behind the rock waterfall houses all of the key pool equipment.

The initial design ended up being in line with the owner’s vision. But that changed as the project evolved. The big challenge involved a hill in the back yard and figuring out how to create a natural flow from the terrace coming off the back of the house down to the pool. 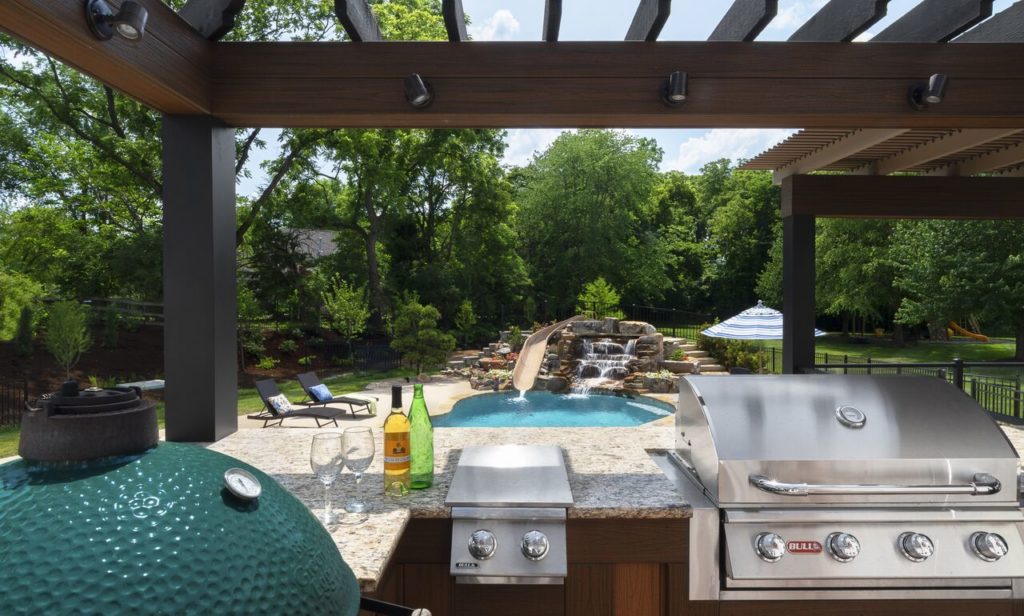 Looking down on the pool from the deck is a view – and an area – to be enjoyed.

“Ultimately, the plans for the stone work helped pull it all together” said the owner.

But before the building began, the owner first wanted to visit with a few other current Liquid Assets customers. “John arranged for us to visit two or three other homes with Liquid Assets built-pools and when we did, I could tell that John really had a good working relationship with all of them. So we started the building process.”

The pool has a tanning deck and stone coping. A dramatic rock waterfall with a built-in slide is a feature that’s enjoyed by young and old alike. And now, there’s certainly more room for a few more rafts. 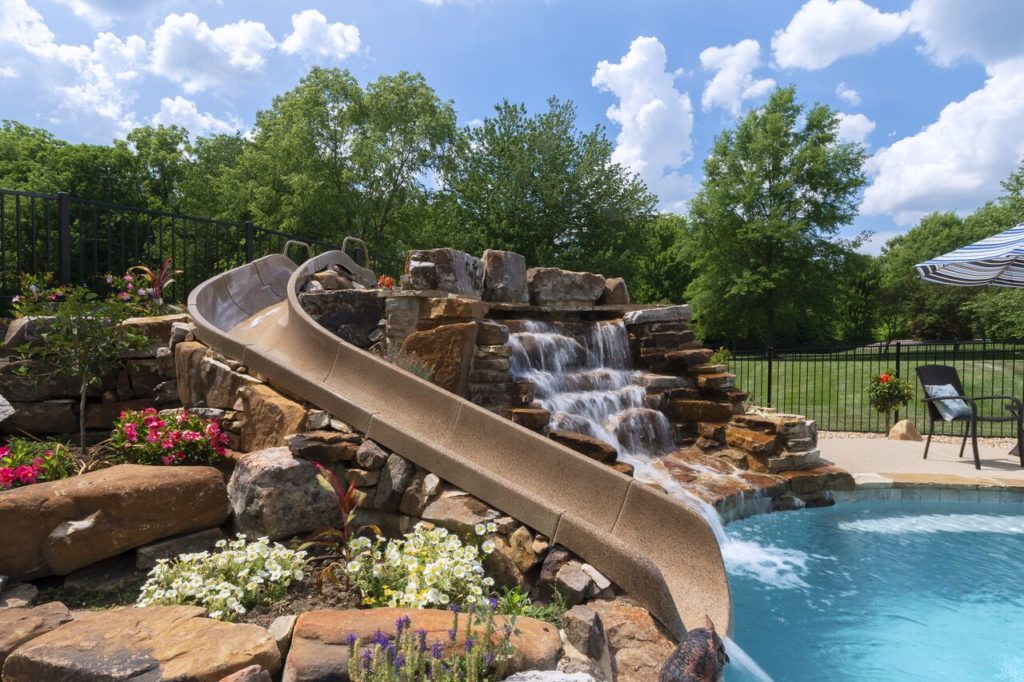 The waterfall is great to look at and the slide is fun to use!

“John and his crews were always very responsive. They kept a very clean work site, making sure to tidy things up at the end of each workday. You look at the pool area now and it looks like it was all planned together. It actually evolved all along the way.”

“Two years have gone by since our pool was built,” said the owner. “We had a problem with a crack in the deck and I called John on it. A lot of pool guys would have said, ‘Sorry, the warranty period is over.’ Not John. His team was out here last week and they fixed it. Now that’s what customer service is all about.”

That’s why when your pool is built by Liquid Assets you get everything else that comes with it.

Now in our 14th year, Liquid Assets Pools specializes in designing and constructing gunite concrete pools for its customers in central and eastern Missouri, Lake of the Ozarks and southern Illinois.